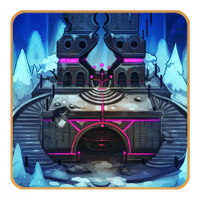 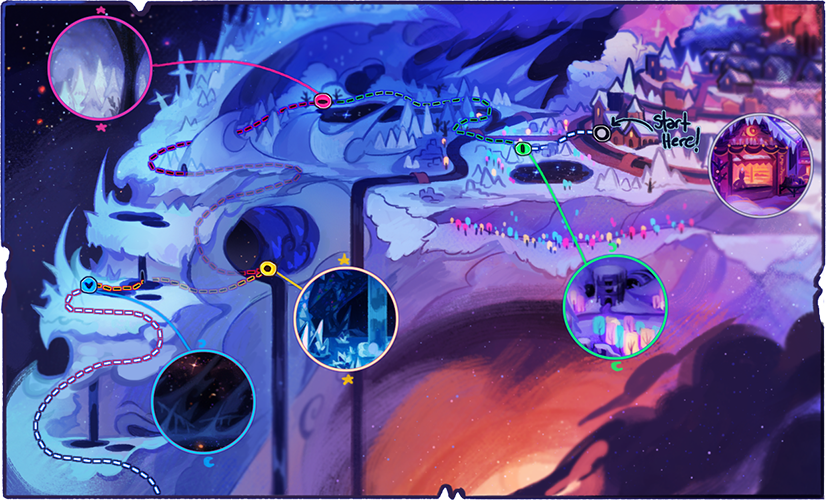 Vinta has just concluded thier slightly confusing, caffiene-powered explanation of the route and tasks assigned to each person participating in tonight's expedition.  The entire time they kept nervously looking at everyone and glancing towards Aventus, who stood stoic near the front of the crowd.

The large, magically projected map they had conjured to aid in their explanation dissipates, leaving everyone muttering to themselves about the plan. Despite opening the floor to additional inquries, Vinta moves on without allowing anyone to actually ask them.

While all in attendance stand at the edge of Snowstar Village awaiting the signal of departure, some townspeople have gathered as well to see the group off. The people that call this town home are likely just as relieved as the school's staff to see this whole thing taken care of - namely the ice monsters.

Those who are prepared for the core expedition are bundled beneath many layers of warm cloaks, coats, and sweaters while others make use of their aspects or enchanted items to stave off the sting of the icy Aldebast winds.

When Vinta takes his place at the front of the group, he casts a simple spell that causes the sound of a chime to ring out for all to hear. It's the signal to finally depart.

The journey isn't easy, and it will take a lot of effort to keep up with the group. The wind and snow pick up and as you venture further from town the weather continues to worsen. You wonder if there might be a threat of a blizzard... Vinta hadn't mentioned such a thing but it does seem like the weather on this moon is wildly unpredictable. Breaks will be taken frequently to make sure everyone is warm and has enough energy to keep going.

While there is a loose path to be followed, much of it has been covered by snow so a lot of time is spent trudging through hefty piles it. It's difficult, and there may even be times where you consider giving up and heading back, but still you push on. After what feels like a few hours you see a strange glow in the distance and as you approach you find yourself at a massive ancient tower surrounded by ice and snow.

Your hair stands on end, you have the feeling of being watched. For an instant you spot something moving in the distance... Something big. What could be waiting for you at this tower?

Note: Do not attach the item to your entry!

Draw or write about your character's experience on the journey across Aldebast
✦✦✦
What area will they explore? How are they faring in the cold? What do they find? What did they bring with them? Do they help others? Do they have any encounters with ice creatures?

Prompt Info
✦ This is intended to be an open ended prompt where you choose how your character progresses in the story! Just pick an area you like and depict your character exploring it, investigating, helping others, or battling ice monsters.
✦ The goal is to head on a path towards the core while stopping in each to disable the four core defense system beacons on the way.
✦ Your character can split off from the group and explore on their own and meet up with everyone else later, it is up to you what they decide to do! Just know that going on your own is dangerous...
✦ This prompt can be done TWICE per user. You only need to do it ONCE to progress. If you decide to do it twice, be sure both submissions feature a different location or task!

Locations
Going off Vinta's explanation it seems there are FOUR possible locations to explore on the path to the core. Pick one location to focus on for your entry.

Aurora Park surrounds the outer edge of Snowstar Village and the Aldebast college, it's a place frequented by townspeople, students, and tourists alike. Old ruins dot the lovely landscapes and are just waiting to be explored by those looking for a lower risk adventure. The plants here are covered with ice and snow and yet still find a way to flourish in the cold with  the most notable flora being the vibrant tree covered in glowing leaves. A river of dark, starry water borders the park and serves as indication of where the barrier around the town ends, and normally this barrier keeps everyone within safe but there has been reports of creatures slipping through in the past...

The further you are from the town, the more frozen and weighted down with snow the trees become. The black bark of the trees is said to be as such due to their roots reaching deep into the ground to absorb traces of energy from the core of the moon, this bark is also where the forest gets its name. The Blackpine Forest is incredibly dense and dark, only allowing trickles of moonlight through its frozen canopy. In the distance stands a dark castle made of ice that loops atop the jagged cliffs, it's rare that anyone can approach it as the forest itself is teeming with terrifying monsters. There is an air of uneasiness in this forest, a feeling of always being watched. It's difficult for thoughts not to wander of stories that tell of those who went missing in this place.

While difficult to find, there are a few surface entrances that will allow easy passage into the Veins of Aldebast if you head far enough from the village. There are large tunnels that run deep beneath the surface of this moon that pulse with ancient energy almost as old as time itself. These caverns are entirely made of sparkling jagged crystals and glowing gemstone shining in bright blue and purple hues that surround a massive underground lake. There are also the occasional large holes that look out towards the stars in Aldebast's eternal night sky. It's actually much warmer down here than on the surface, but that's just about the only hospitable thing about this place.

The coldest and most unforgiving place on Aldebast. The Dark Side is so far from the village that it sits as only a small shimmer of light in the distance on a clear night. Blizzards tear through this place often and monsters lurk behind every pillar of ice. Large frozen branching slowly spines grow in formations that reach towards the sky as if the ice itself has a mind of its own. Rather than water, there are only large frozen pools that reflect their surroundings like a perfect mirror. Nothing in this place has thawed in likely hundreds of thousands of years, and as such there may be strange secrets locked deep beneath the ice.

Tasks
At each location there is an ancient Pylon Tower you can explore. They're riddled with tricks, traps, and icy monsters that challenge any who get near. These towers are rather large and have glowing runic bands covering some of the stone. These runes show up in pink, blue, green, or yellow depending on the location. 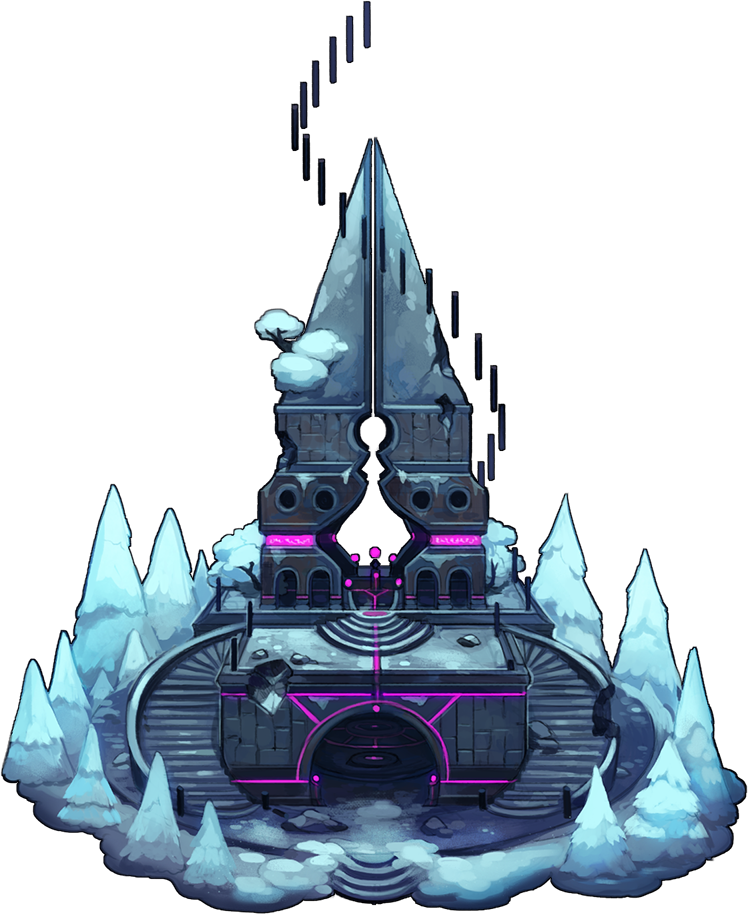 Inside the tower is a glowing beacon. The source of the tower's power.

Shutting this beacon down after handling whatever obstacles you encounter should shut down the entire tower too.

Threats
Watch out! While you explore, as there are giant  ice monsters that could attack without warning and easily take out someone unprepared. They appear similar to the fauna naturally seen on the surface of Aldebast and couldeasily be mistaken as such, but it's that very misunderstanding that would be a deadly mistake to make if you were to encounter one. Three in particular have been spotted lurking along the path Vinta planned out. They seem attracted by the excited sounds of adventurers.  Be careful if you go off on your own as there are many stories of people disappearing in the Aldebast wilds.

You can optionally include an ice beast in your entry, it must be one of these three. It is up to you how your character defeats them! Do they fight? What's their strategy? Do they trap it somehow? Maybe they befriend it? They could also simply run away and leave it for others to deal with!

Oddly enough, when the group comes across any kind of challenge Aventus hangs back and simply observes the course of events. Vinta would do everything they can to help if they're nearby however!

✦ Your entry can be written or visual art
✦ Entry submitted must be created by you
✦ You use your own characters and/or the characters of other users! You are also able to create entries that are entirely gift art. You can find characters open to gift art here.
✦ Non-owners can use community characters.
✦ Any items/currency obtained from this prompt are not bound to you and do not have to be used on the character you completed the quest with.
✦ All stargold bonuses can apply! You can find all stargold bonuses here.

✦ Winter bonus: Characters here will grant +1 extra stargold if included in an entry.
✦Ice Beast Bonus:  Including any of the three Ice Beast threats in your prompt will grant one rare mount bonus (+4 SG). This does not stack with other mount bonuses and must meet the mount participation requirements. 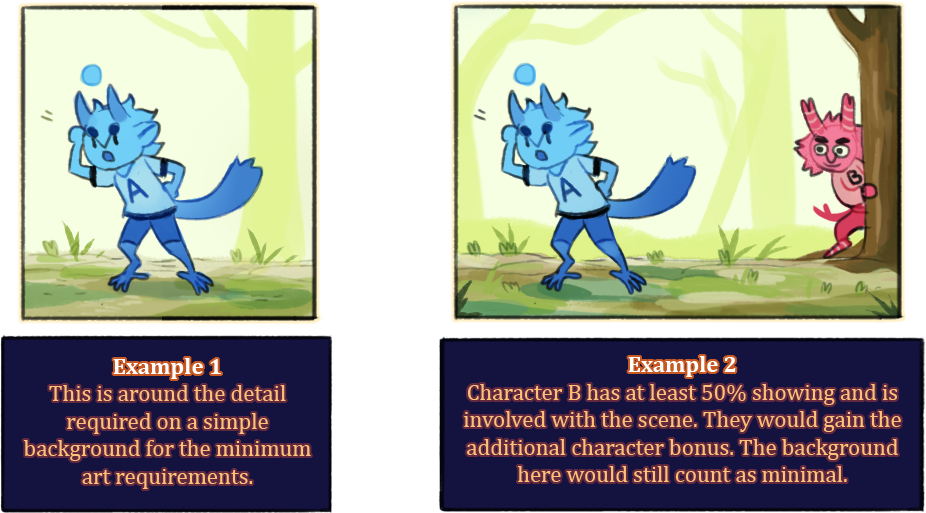 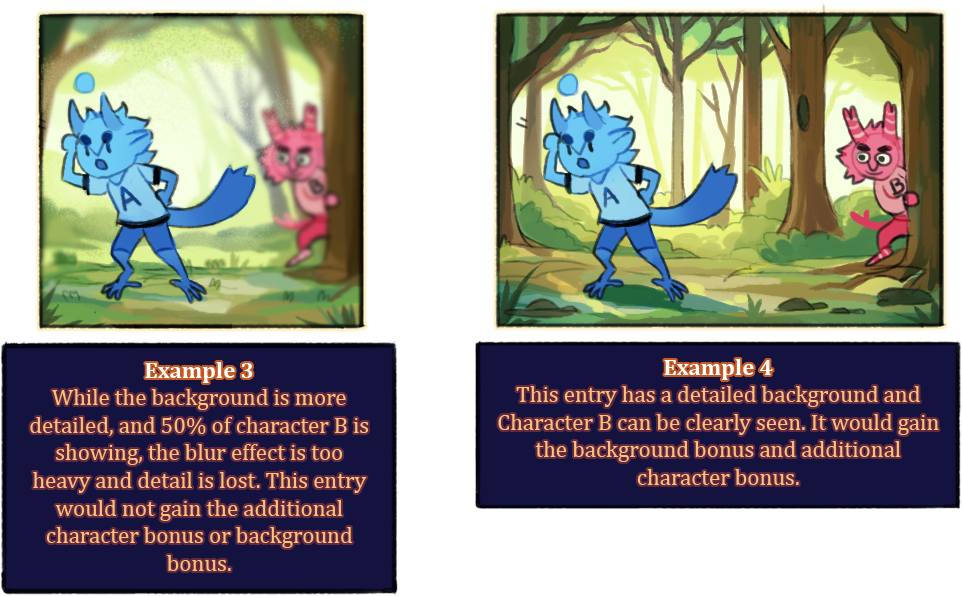 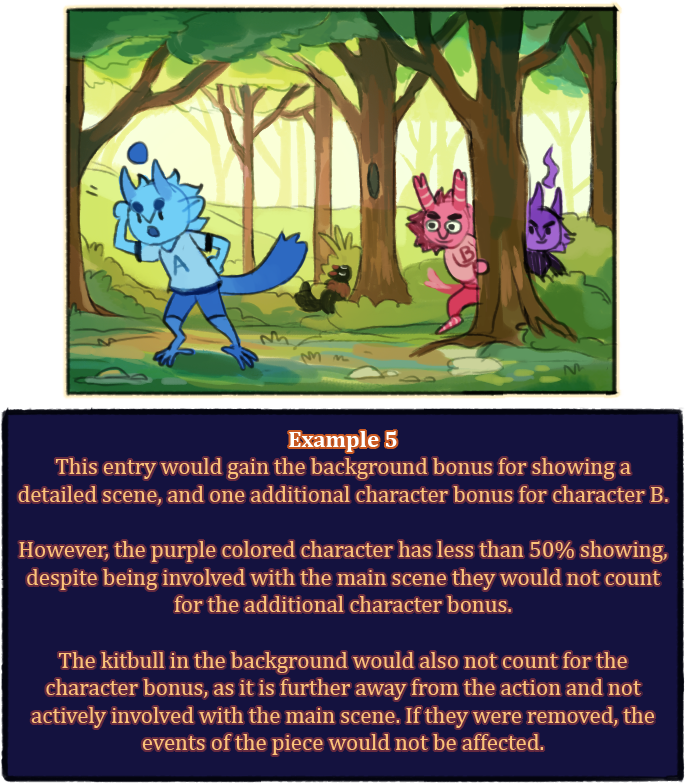 ✦ Can be completed twice per person. (You will only need to do it once to move on to part 3.) You can come back and do the second entry after part 3 too if you want!
✦ For an entry to count for gift art bonuses it must only include characters belonging to other users. If you use a companion belonging to you it will still allow the entry to be considered gift art.

✦ Please do not include unofficial characters in your entry.

✦ Please do not trace, heavily reference, or plagiarize another person's work.

Be sure to use the "add rewards" options to account for all stargold bonuses you earn. You do NOT have to include the base rewards! They are automatically included.

Use the "add characters" option to properly tag all characters involved.
Do not attach an item to your submission unless it is a 1 time use item.

This prompt has ended.