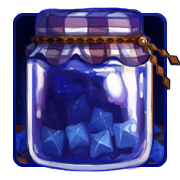 ★ Obtained from:
• Reward from And We Got Older Quest

This trait can only be added through this item.

✦ This trait is counts as an additional trait and does not replace other traits
✦ Each use of the item only adds one set of antennae, to have multiple sets you will need multiple items
✦ This trait can be placed anywhere on the head, such as from the eyebrows, behind the ears, or the top of the head.
✦ You can add one antenna (in the case of the character missing one), or make the pair asymmetrical if you want!
✦ Space Antennae at minimum must be 3 links long, and their maximum length can be long enough to barely brush the floor.
✦ This trait takes the form of a chain of the same shape. The examples shown are not the limits of the trait. The possible shapes you are able to use are symmetrical simple shapes such as diamonds, squares, hears, twinkles, and 5-point stars and 6-point stars.
★ Description:
A jar of sweet preserves flavored with small berries, called space berries, that are similar in shape to stargold. Space berries is moreso just a nickname, as they often can be found growing just about anywhere out in space as long as they're in a cold environment and close to a leyline. Though, their favorite type of environment would be on the sugar comments that stargold is created from.

Space berries are a common berry that can be found everywhere in huge numbers, but the difficulty with them comes in when trying to gather them as going out into space to collect berries from comets near leylines is no easy task for your average person.

Space jam is often spread on bread or used as filling for pastries. It's incredibly popular, especially in the springtime as, for some reason, that is when the berries are most plentiful.

Uses: Allows you to add the Uncommon Space Antennae trait/mutation to a browbird, kitbull or painted satyr.