And We Got Older

[✨💎🌈] ★ Depict your character at various stages in their life. Earn a quest-only trait! ★

As the hands of time move forward, we do as well. People come and go, seasons pass, battles are fought, towns are built, change is all around us. Where we come from, every experience we have and the people who grow alongside us will each leave their own impact, shaping us into who we are today and who we will be tomorrow.

Browbirds, painted satyr and kitbulls come from all across the stars, so it's only natural they would grow up in all sorts of places. With time, a browbird may decide to leave their home to explore the local area, their entire world, or even set sail for the stars. Where one may never experience the cold starry sea air in their lifetime, another may have spent their entire life seeing different worlds.

For most, growing old is an inevitable part of life. Some may eventually grow tired of travel and decide to settle down, while others may not begin their journey until much later in their life.

The lives of those in the Celestial-Seas can vary immensely as each individual has their own story to share!

Draw or write about how your character has grown and will change throughout their lifetime.
Depict your character as a child and as an adult (their current design) to show how they have changed over the years.

You can optionally include additional stages, such as a version of them in their teen years, or future versions of the character as a way to explore your hypothetical plans for the design. In a future older version, you can add features that are your goals for the character (Example, if you do not yet have broken horns you could add them to the "future" older version of the character if you plan to get them)!  While the design does not officially have those traits yet, it can be fun to ponder the possibilities!

Please be mindful of group rules and do not use these hypothetical designs as the current "canon" design.

Was your character raised by their family? Were riches bestowed upon them from birth, or were they left to fend for themselves with nothing but a blanket to keep them warm? Perhaps they wandered off from home in the middle of the night wondering what that glowing bright light in the distance harbored.

As your character grew, were they the sort who could do no wrong, or maybe they were an absolute troublemaker always pulling pranks on unsuspecting victims.

How did their local traditions affect how they dressed or who they aspired to be? How has the way they express themself change over the years?  Did they ever travel far from home and if so; Do they still feel close to where they came from?

Were they surrounded by others for most throughout their life, or were they the sort who was left alone, either by choice or through an unfortunate turn of events?

From when they're a child, teenager, adult, and old, think about how your character's surroundings and experiences shape who they are!

Example of baby vs. adult versions. 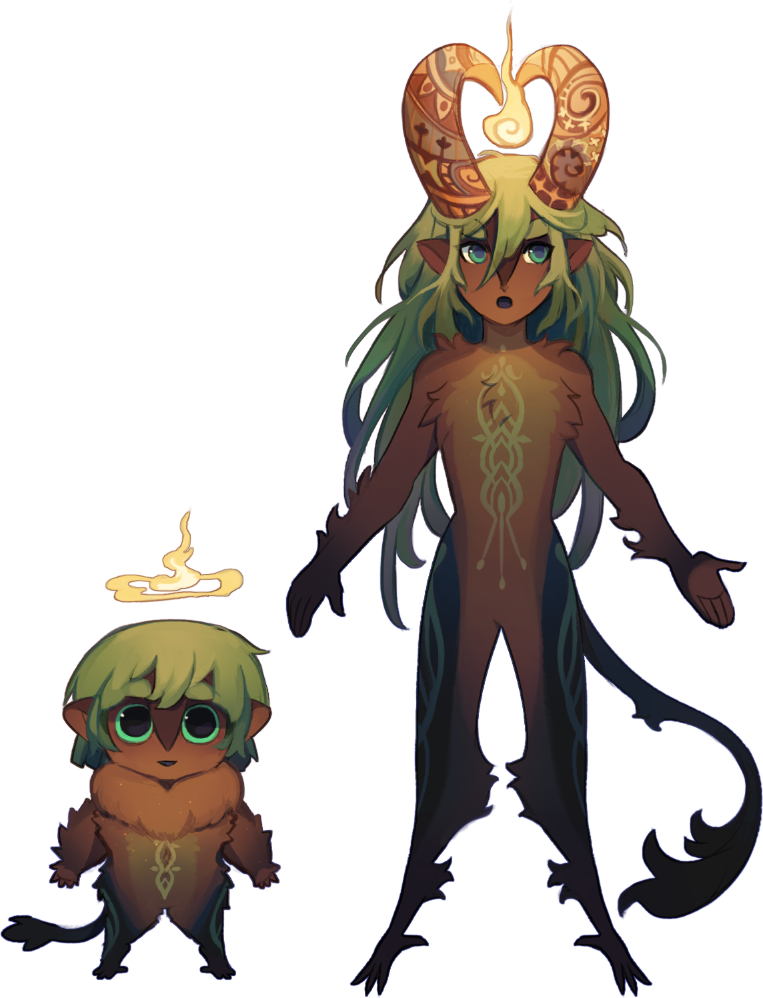 ✦ Browbirds don't have a fully formed crest until they become an adult!
✦ Browbirds don't show signs of their second aspect until they become an adult.
✦ Their horns will often be much smaller or even not yet grown when they are younger.
✦ Runic markings, broken horns, and horn carvings are applied traits and may not be on a young child browbird.
They are incredibly fluffy as babies! 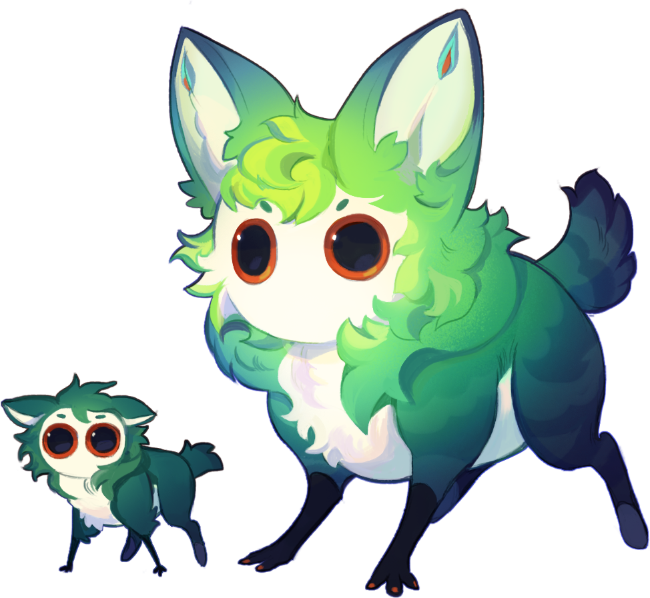 ✦ Kittles often don't have as many colors and markings when compared to their adult selves
✦ A kittle likely wouldn't have any mutations or peculiars yet since they would gain those slowly over their life. So wings, horns, flaming fur, and the like would not yet show up on a young kittle!

✦ Runic markings and horn carvings are applied traits and may not be on a young child satyr.
✦ Their horns and sometimes their tail appear as small sprouts instead.
✦ Any flora they grow will appear as sprouts that gradually changes over their life into their usual flora.

✦ Painted satyr have many ways in which they come into being. For those that are born normally they would look much more like a regular baby. But for those who are created through magic and mud, they might resemble the cute onion-shaped fellows shown here for a little while!

✦ Painted satyr can also come into being through having their mask placed over the body of a dead humanoid and then buried in a place that has a natural source of power (Such as near a magic tree). For characters like this, feel free to possibly show a scene from their past life before being reborn as a painted satyr!

✦Your entry can be written or visual art
✦ Entry submitted must be by you
✦ The Celestial Seas character used as the focus in your submission must belong to you.
✦ You can include additional characters you own, or characters owned by other users. Make sure you have permission to use a character in your entry. You can gift characters open to gift art here.
✦ Items obtained from the quest are not bound to you and do not have to be used on the character you completed the quest with.
✦ All stargold bonuses can apply! You can find all stargold bonuses here.

You are also able to depict your character at more stages (Max of 6 total. Current version + Child + 4 others). You can depict them at older ages as well and are allowed, for this prompt only, to add traits to them you do not yet have to show your "goals" for the character. Please do not use these unofficial "future" designs as the canon design. It is just for fun!

✦ For visual art submissions:
Must be full color
Must show at least 75% of the focus character
Must clearly follow the prompt given
Must have at least two forms of the same character (child and adult)

✦ For written submissions:
Must be at least 800 words
Must clearly follow the prompt given
Must have at least two sections about the same character (child and adult)

✦ Can only be completed once per character.
Completion will be added to the character's profile description.

✦ Cannot be completed as gift art.

✦ You can use a max of 1 companion, 1 trinket, and 1 clothing item TOTAL on your entry. Multiples of the same type are not allowed.

✦ Browlets cannot participate without an approved adult form. Consider designing their adult form for this quest (please submit the adult art before submitting the quest art)!

✦ Please do not include unofficial characters in your prompt.

✦ Please do not trace, heavily reference, or plagerize another person's work.

Be sure to use the "add rewards" and "add characters" to account for all stargold bonuses you earn and all your characters and companions.
You do NOT have to include the base amount (5✨) ! It is automatically included.

Written by Witch
Art by Corrin