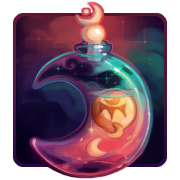 ★ Obtained from:
• 🎃 Fall Event Merchant - Purchased for ✨50
• Reward from Candleblight 2019
• Reward from Haunting of Withermourn Manor 2021
★ Use:
Can be used on browbirds or painted satyr.
One time use. Consumed once design is updated.
You must go through the design change station to make the updated trait official.

This adds any amount of crescent moon shaped markings to the design somewhere on the body. These markings can optionally glow. If being used on a browbird, the glow should match at least one color on the crest.
★ Description:
A dimmly glowing potion that has a strong smell indicating a high magical content. It became dangerous due to sensitive creatures, such as kitbulls, breaking into places where the item is stored and exploding from absorbing too much. This eventually resulted in the brewing of the potion being banned, however it has seen a comeback in recent years at Candleblight parties though you'd only see it brewed in small amounts to avoid disaster.

Candletown never banned the beverage though, so you'll find some festival stalls still selling it. Be careful!
★ Alternate Item Art:

★ Use: Allows you to add the rare Moon Markings trait to one Browbird or Painted Satyr.