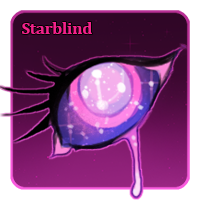 Can be applied to browbirds and painted satyr.

Starblindness is an extremely rare condition that causes the eye to become cloudy with stars and sparkles covering it. The browbird will have minimal or no sight in the eye/eyes afflicted with this trait. Colors and images will be distorted, sometimes causing the browbird to see into the past for future for very brief periods of time.

It is sometimes considered a punishment granted to those who recklessly pushed the limits of magic too far for their body to handle and thus resulted in irreversible magical damage to the eyes. This can be from using more energy than your crest can muster for a long period of time, causing your aura to compensate by looking elsewhere in your body for energy.

On the other hand, there are some who end up inflicting this condition onto themselves in an attempt to achieve starsight and ultimately failed.