The pharaoh doesn’t turn around, lounging on his balcony as he gazes over his city and merely beckoning Azimuth to join him with a simple wave of the hand. He had been told that someone in the city had requested to speak to him and while an extremely rare occasion to allow someone unfamiliar into a private meeting with him, he was in such an elated mood from the ongoing events that he had allowed it.

There’s a moment’s hesitation before she approaches him, and she makes sure to leave a gracious space between herself and the pharaoh out of respect for such an important individual. She clutched her clipboard close to help hide how much her hands are trembling, it takes most of her focus not to lose composure. To think she would be here, standing before Heru and speaking to him in a private audience!

Without turning his head Heru suddenly spreads one of his wings and uses it to gently push her towards a spot beside him. She squeaks in surprise, face flushing bright with embarrassment at his overly friendly demeanor. Noticing him glance her way, she clears her throat, doing everything she can to look relaxed and professional as she fixates on the view before them.


At this point Heru turns his back to the city view, crossing his arms in a stoic manner. The sudden change in his disposition causes Azimuth to jump in surprise. She swallows hard and quickly flips open her clipboard to check her well-organized notes.

She produces a small box that she had been holding under her arm. Opening it reveals a pendant with a distinct black and red stone with a vertical eye mark carved into it.

Azimuth blinks, temporarily stunned. He's... Actually asking her what to do?

Azimuth pulls forth a digital screen of light that displays a map of the area. With great efficiency, she points out areas of interest while cross-referencing with her notes and explains where guards could be positioned. Heru listens intently, looking Azimuth over and rubbing his chin in thought.

Heru grins knowingly and returns his attention back to the magnificent vista in front of him. Even though his smile is the same, his grip on the rail has ever so slightly tightened. Once more, Azimuth hesitates, but she decides it is better to respect his words than to ask what might be on his mind. He is the pharaoh, after all… What could possibly go wrong?

The Sun King’s words resound from the vaulted roof that embraces the Grand Hall of the Royal Casino. Those who have not been paying attention to the stage setting up before them would have found themselves now fully enamoured by his striking charisma. Even before it was said, they knew it was time to announce the winner of the grand prize!

Each and every single contestant of the games over the last few days has gathered, heads angled upwards towards the balcony which is decorated with golden trims and imposing imagery of different desert-dwelling creatures, aligned in perfect symmetry to frame the Hiros who currently has both arms extended as he waits out a long pause for dramatic effect. After what he deems a sufficient amount of time to build suspense he begins to laugh, a familiar sound that echoes over the masses. He then clears his throat, a wide grin showing that he thoroughly enjoyed the attention he was receiving.

With Heru being the focus of attention most are unlikely to notice the first light blow out at the back of the amphitheater.  The Pharaoh is not like most, however, and his voice falters as his attention becomes fixated on the sudden changes progressing throughout the building. One by one each of the floating lamps illuminating the room shatter until there is nothing but darkness, with only the glow of crests left to faintly illuminate the crowd.

Murmurs of unrest and panic began to stir, the crowd unsure if this was a part of Heru’s display or something far more worrisome. Heru steps forward, eyes cutting through the darkness like a knife as he notices that many inscriptions inlaid around the walls of the room have started to glow with a sinister crimson hue. In the split second the Pharaoh realizes what was happening the runes dim, a cold aura creeping into the room as the magic dampening wards that would normally keep the amphitheatre safe was deactivated for the briefest moment.

Something was happening. A spell had been cast in the split second the wards had been rendered useless, magic now creeping into the foundation of the floors and the walls like a quiet sickness. The ground begins to rumble, the stage starting to split with large, dramatic cracks that crawled up the platform almost as if they had a mind of their own. From there they spread outward to the edges of the room, racing underneath the guards positioned around the exterior of the room and then up the walls. In an instant everything began to crumble, the ceiling sprinkling stones onto the crowd and the floor bending inwards under the weight of the crowd.

With a brilliant flash of gold Heru spreads his wings, leaping off the stage to avoid a particularly large chunk of the roof that was destined to crash into where he had been standing only moments before. Realizing the severity of the situation he raised his hands, suspended in air in a dramatic display as he cast a powerful arcane spell to catch the falling debris. Even with his prowess, onlookers could tell that Heru’s very own wards were working against him in getting the situation under control. What would be a simple spell for the Pharaoh was proving to take much more focus, and even as his eyes locked on a very familiar someone approaching the prizes on the stage in the midst of the chaos he knew he could not place the value of the items over the lives of so many in his care.

The very person Heru had noticed was indeed making their way towards the prizes, seeming strangely calm as he approaches them. A smile slowly grew on his face as he stopped in front of the beautifully adorned pedestals, one hand lifting to push some of his luscious white locks out of his face. It was the perfect moment for Mosaic to claim the prize for himself, and he reached forward with utmost confidence towards the Astravum that was ripe for the taking.

He places his hands on the stone, ready to swipe it off and make a quick exit before a sudden and painful force knocks into his side and causes him to fall to the ground with a loud grunt. Shocked, he spins around from his place on the floor with a rare expression of agitation in the form of bared fangs. 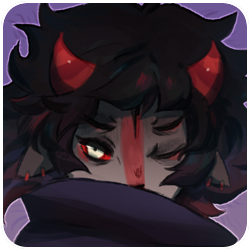 A cloaked figure stared back at him with a single glowing eye momentarily before moving forward, reaching down to pick up the prize with a dark gloved hand. Unwilling to lose what he had come so close to obtaining, Mosaic lunges, knocking the mysterious person onto the stage and struggling with them to gain possession of the Astravum. Locked in combat they tumble backwards, falling off the stage and into the crowd below.

Despite Heru’s efforts, the pillars supporting the room began to collapse and the floor was no longer stable enough to prevent the inevitable. For a brief second, all sounds stop. Then, in the next breath, the floor suddenly heaves into a gaping chasm as it concaves inward. Many guests fall into the dark abyss below, including Mosaic and the thief.