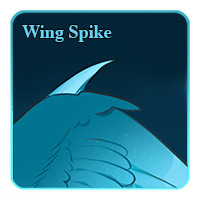 Trait: Adds a spike to the last joint of the wings on a hiros browbird. Ie: where the thumb would be.
Size: Should be small.

✅ Can be asymmetrical in shape/style/placement
✅ Can be placed on any/all wings on the design.
✅ Can be curved.
✅ Can have extra smaller spikes added to the main spike if you have the rosethorn trait.

❌ Cannot be made out of metal/gemstone/other elemental materials by default unless you have the trait required for it. Shouldn't be metallic/super shiny either.
❌ Cannot be placed anywhere on the wing other than the "thumb" area.
❌ Cannot be applied multiple time to add more spikes to a single wing. Each wing can have a maximum of 1-3 spikes and you only need to apply this trait once to add it to as many wings on the design as you want.
❌ Does not add a thumb joint to the wing (similar to a dragon or bat).