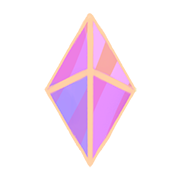 The personality section is just for fun, your character does not have to fit into this! Consider it more like a zodiac.

This trait is a WIP! While it is available for use, please be aware that designs submitted are more likely to be rejected if they use this trait due to lack of up to date reference material.

🌈 Can be added to any kitbull by using the Crystallized Soul item.

★ When editing a character with this trait:
✦ If the trait was applied using the item it cannot be swapped to another trait, it can only be edited to a different variant within the same trait (ex: changing the look/type of the gemstone on a kitbull with the Crystalline trait) and have it's coverage edited, or be removed.
✦ If the design was created with this trait without use of an item it can be swapped to a different trait from the Crystallized Soul list using an Appearance Change.

★ Info
✦ Each trait from the list counts as 1 peculiar trait
✦ Use of the corresponding item only applies 1 trait from the list, to apply multiple traits it will require multiple uses of the item or access to multiple peculiar traits
✦ The "can combine with" section indicates traits that can be used to modify the appearance, such as allowing the trait to glow or float. If you have access to both traits you can use these hybrid features.
✦ Keep in mind when adding traits that change/replace parts of a design to a different material that using these features to add large amounts of new colors/markings added to the design may have the update turned down.

Trait: Shatters part of the kitbull's body as if it were glass
Size: Coverage depends on part chosen.

✅ Application can be asymmetrical
✅ Each use of the item shatters one of the following features: Wing, Arm, Leg, Tail, up to 50% of main body
✅ Shattered parts float close together in the shape of what their original form was
✅ Optional: Can reform and shatter at will, when reformed there are thin cracks marking the broken area. If you would like the character to have a reformed version you must submit both a shattered and reformed variant when using this trait.

✅ Application can be asymmetrical
✅ Each use of the item replaces one of the following features: Wing, Arm, Leg, Tail, Eye, Ears, Horns
✅ Does not have to encompass the entire part
✅ Can replace limb on one side of the body or both sides
✅ Crystals can be fictional or based from real life specimen

Trait: A single ring of light encircles part of the kitbull's body in a place of your choice
Size: Ring size depends on where it is placed and should be proportional.