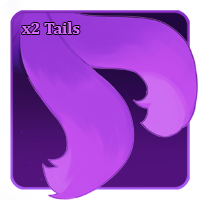 Additional Tail Customization.
Adds a second tail onto the design.

☑️ If your existing browbird design has a rare or mythic tail this trait can be added with an Appearance Change at the Salon.
🌈 Can be added to a browbird design with a common or uncommon tail using a Rare Trait Potion. This will convert the tail to a rare tail and replace the current rarity.

❌ This trait can only be applied once to a design. It cannot be applied multiple times for additional tails.