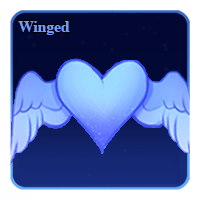 ➕ This trait can only be added to the Hiros/Half hiros subtype.

✅ Existing Designs: When your character already has an uncommon crest, or a crest with uncommon effects you may add on additional uncommon effects (or effects of lower rarities) at the design change salon through the use of an Appearence Change ticket.
❌ Uncommon effects cannot be added onto an existing design otherwise. And item with this functionality is planned for a future update.

✅ MYO Designing: When designing a new character, adding an uncommon effect to a crest shape of a lower rarity makes the entire crest uncommon. You may use an Uncommon Trait Potion or purchased uncommon trait to make the crest uncommon.

Trait: The uncommon winged effect can have 1 - 2 wings placed anywhere on the crest.
Size: Wings should be no bigger than what is shown. However, there is no size limit to wings on mythic crests.

✅  The wings themselves can be styled differently than what is shown. They can blend more with the crest or be more stylized.
✅  They can be attached to the crest or floating very close to it.
✅ They can be applied to any crest shape, not just the ones shown in examples.