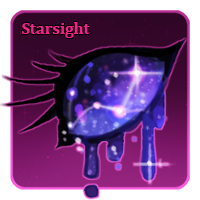 Trait:  Allows for the eye to be completely replaced a space-like effect with stars and sparkles.
Size: Only affects the eyes.

✅ Can be any color
✅ Those with starsight will cry sparkling tears that resemble space, these tears can often stain the character's face.

❌ Both eyes must match unless the character has Mismatched Eyes

Starsight is an incredibly powerful ability that's almost unheard of as a natural occurrence outside of the mysterious Reverie type. However, it is possible for one to obtain starsight through many years of pain staking work, experimentation, magic training, and some times what could be considered self torture. Most of the time these things will ultimately fail and leave the browbird permanently starblind.

Starsight grants a whole new range of abilities to the bearer, allowing them to see things that they could not have hoped to process before. Even this small sliver of the gods' powers allows them to glimpse into alternate futures and pasts, as well as see off into distant planes and worlds. To gain this they do have to sacrifice their present vision. It is both a curse and a blessing in many regards.