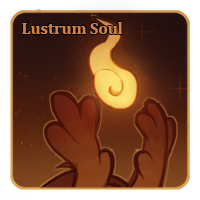 🌈 Can be applied to a painted satyr using a Soul Seed.
This trait can only be obtained through this item.
Special traits cannot be swapped for other special traits.

Trait: Adds a single "crest" to a painted satyr, mimicing a browbird's crest. This "crest" can be a flame, orb, or comet variant.
Size: Should not be much larger than given examples.

✅ This item can be used on a single design up to three times to apply a total of 3 crests.
✅ Crest can be any color. For dark colors there must be a light area on the crest (such as light sparkles) or a light outline. Crests should glow or have a glowing area on them.

❌ Crest must be placed somewhere above the satyr's head between or beside the horns. It cannot be behind the head or placed elsewhere on/around the body.
❌ This trait does not replace other traits.
❌ This trait should not intersect with other traits.
❌ Each use of this trait only applies ONE crest. To have multiple crests you will need multiple copies of the item. This item can only be used up to three times on a single design.