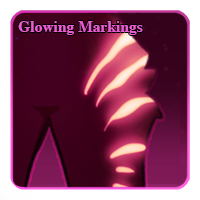 🌈 Can be applied using a Mythic Trait Potion or Latte of Light.

Trait: Adds glowing markings to the browbird or painted satyr.
Size: Cannot cover more than 75% of the character's body.

✅ They can be placed anywhere on the body of the character.
✅  The color does not have to match the crest color. Multiple colors are allowed.
✅  Can "turn on and off". If not glowing by default, a reference must be provided on masterlist art for when they are glowing.

❌ Glowing markings cannot be white unless the crest is also white. Any other color is fine!
❌ Glowing markings should clearly be markings, rather than large flat portions of the body that glow. Example: Glowing stripes are fine, an entire glowing leg is not!
❌ This trait does not change color by default
❌ Markings that glow should be visible, even when they are not glowing.