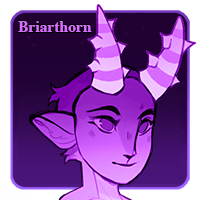 🌈 This trait can be applied to a Painted satyr with a Rare Trait potion or Rosethorn Water.

Trait: Adds one or more of the following to the satyr:

✅ Can be asymmetrical in style/placement. Both large and small spikes can be used at the same time on patches.
✅ Spike color does not have to match patch color

❌ This trait does not add more branches! It only modifies the shape of branches. Each thorn on the tail or horns would be considered a branch.
❌ Spikes cannot be largely curved, and must remain generally straight in nature.
❌ Horn and tail spikes must clearly resemble thorns. This trait does not just simply give branches pointed tips, but rather makes them thorn-like in appearance.