Hiros browbirds are only available to you if your MYO slot or custom allows for a hiros!

Hiros are browbirds have distant heritiage ties to the Hylos, a mysterious race of angelic space beings. This caused a small group of browbirds to split off and eventually develop wings in ancient times. In the Celestial Seas universe, hiros are thought of as especially mysterious and magical, and given that they are extremely rare it only causes others to be more curious about these winged people.

Hiros come from a flying city by the name of Throne. The city soars above the clouds of the browbird homeworld guarded by an ancient skylord named Pavellon, and it is the last remaining hiros sky fortress following the Void Wars. Nearly all hiros were born there or have ties to that place, but it's not unheard of to find one on some distant star who never knew of the city's existence. Those who are born far away from the city may make it their quest to journey there one day.

Pairs between hiros browbirds venturing out from their home city and standard browbirds from the worlds below are actually fairly common and acceptable in hiros society. Some of these unions even result in a half-hiros, a special hybrid who often will be born with small wings, or non at all! Hiros accept half-hiros without question, and they are welcomed into the flying fortress. Though they still hold a strong distrust for any non-hiros outsiders and rarely will let them into the city.

Hiros, overall, have a distinct culture, religion, and beliefs that is different from those you may see on the surface of the browbird homeworld. They often have more family-like care structures for browlets where browlets are allowed free roam and are looked after by everyone in the city. Hiros also often form smaller tight-nit groups of 2-3 birds rather than larger flocks or complex relationship webs like non-hiros browbirds do. They are more open to many types of magic, including the more dangerous types (like death and chaos) and are more accepting of risky magical experimentation. They also do not mind halvs and revenants and do not hold any fears towards them, curiosity would often be their first thought rather than fear or worry.

✅ Hiros must have medium to large feathered wings placed on the browbird's back
✅ Half Hiros can have smaller, flightless wings
✅ Hiros or Half-hiros can be wingless but they will need at least 1 other hiros exclusive trait visible on the design
✅ Hiros and Half Hiros should have 3 aspect slots. They do not all need to be filled!

✅ All common hiros traits can be applied for free when creating a new hiros or half hiros browbird or transforming a character into a hiros.
✅ If you would like to add on or switch to a common hiros trait on an exisiting hiros design, you can do so using an Appearance Change.

✅ The hiros type can be applied to revenants, halvs, and ancients
✅ Hiros-exclusive traits are available IN ADDITION to regular browbird traits, you may still use all regular browbird traits on a hiros.
✅ If you use a rare trait on  a hiros you can choose a standard rare trait OR hiros rare trait!
✅ If you have a regular trait with rarity, you can swap it to the hiros version of that rarity using an  Appearance Change. Such as swapping uncommon horns for hiros uncommon Winged Horns.
✅ You can swap between hiros and half-hiros features using the Appearance Change.
❌ Uncommon, Rare, and Mythic hiros traits cannot be added for free and will require access to the trait AND for the browbird to be a hiros or half hiros.
❌ The back wings cannot be removed to be applied to another part of the design

Reference images not completed for all traits, apologies! 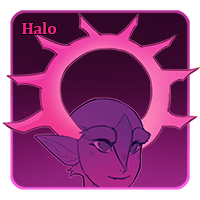 Hylos Blessing (Mythic) - Allows the character to have up to 3 sets of wings by default, or up to 4 max if you also have skylord wings.