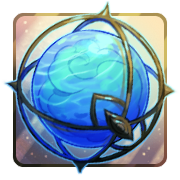 🌟 Stone of The Sea

★ Use:
One time use.
Permanently transforms one browbird into an Astrean browbird.
The Astrean version becomes the new canon design and they are not able to return to their original form without being reverted.
You must go through design changes to have the updated design made official.

The transformed character should not be drastically different from the original. They should retain their overall look, palette, horns, crest, markings, and so on.

✦ Info:
✅ Adds +3 aspect slots to a standard browbird, or +2 aspect slot to a hiros browbird, or +1 aspect slot to a halv, ancient, or revenant
✅ Can be applied to an existing character or MYO during the creation process.
✅ Can be applied to half-hiros, hiros, ancient, revenant, halv, and reverie
✅ Grants access to free astrean traits
❌ This type replaces the standard type when applied.
★ Description:
An orb filled with water taken from ancient seas that the Astreans called home, and sealed away for thousands of years. The care put into crafting it, and the time it has been left untouched had allowed it to gradually generate it's own magical energy and now it is extremely potent and powerful.

These items are extremely rare and usually only one or two at most will ever be found in an Astrean temple, and even then they are hidden away from anyone who might pass through. Due to their scarcity and the obvious dedication that was put into creating them, it is often thought they were used for some type of ritual important to Astreans and therefore are sacred objects.