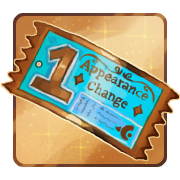 ★ Obtained from:
• Specialty Supplies - Purchased for ✨3
• Welcome Gift - Obtained for free 1 time per user
★ Use:
One time use. Consumed once design has been updated.
You can use this ticket at the Salon to make edits to a single character. Please check the Salon for more information on this item as well as image examples of how it is used.
The appearance change ticket lets you add common traits, change existing traits, and swap around as many traits as you want during a single edit submission. You only need ONE TICKET to do as many of the possible listed changes below per submission.
Here are some examples of what will require this item:

• Adding a common trait to a design
• Adding free mask material traits to a painted satyr that they don't currently have
• Changing the crest effects of a browbird, such as switching blazing to radiance as long as it does not change crest rarity
• Changing a trait to another style of the same rarity, such as switching your existing rare horns to an entirely different set of rare horns
• Changing trait to a lower rarity, such as changing your rare tail into an uncommon tail
• Swaping trait rarities, such as removing your rare markings to change the tail to rare
• Completely changing the placement of additional traits, such as moving a hiros browbird's body wings to a different spot
• Swapping a kitbull's peculiar trait to a different peculiar trait allowed by the same peculiar
• Changing a kitbull's mutation to a different mutation
• Changing a trait to a completely different variant covered under the same trait, such as changing a painted satyr's fruit flora that resembles grapes into fruit flora that resembles apples.
• Changing a half-hiros to a hiros and vise versa

This item cannot be used to change aspects, browbird crest shape or painted satyr mask material.
★ Description:
A ticket for 1 day at the salon!