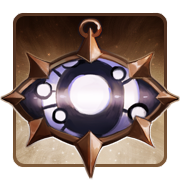 🌈 Gift of the Eyes

★ Obtained from:
• Gilded Gacha
• Summer 2020 Event Crafting
★ Use:
Can be used on browbirds, kitbulls, and painted satyr.
One time use. Consumed once design is updated.
You must go through the design change station to make the updated trait official.

Grants one character the special Eye's Gift trait.
This trait counts as an additional trait and does not replace other traits.
This trait can ONLY be obtained through this item. It cannot be added to a preexisting design or MYO without the item.

✦ Must remain close to the example in terms of placement, size, and light/dark.
✦ Maximum size is shown
✦ Only one halo can be placed in a ring around the neck with this trait, cannot be placed on other parts of the body
✦ Cannot overlap or insersect with other traits, it must remain separate
✦ Can lightly glow
✦ You can mix different features of the examples below, but it should generally keep the core eye concept

You can see an example of the trait here:

★ Description:
A refined eye stone that is meant to be worn on a chain and placed around the neck. Through magical means, the enchantment will transform the necklace permanently into a halo of eyes surrounding the neck.
Spiral eyes are quite valuable, especially those that are purely black and white, which are considered one of the purest forms the stones can take. The symbol has a long meaning and is important to the history of browbirds and many other groups of people!