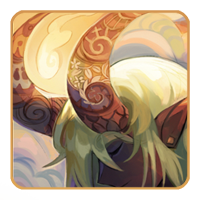 [✨💎🌈]★ Explore an important moment in your character's past ★

A characteristic that many species of the Celestial Seas share is their horns, which come in a variety of shapes and sizes. After existing for thousands of years with such a feature, various beliefs and customs began to form around horns.

When visiting any place with a large population of browbirds, it's likely that you'll see the occasional person with intricately carved horns. Sometimes they appear in abstract swirls, while others will have detailed carvings that seem to tell a story in its design. The exact style and symbolism behind each carving often relates to where the person is from, what symbols are important to them, and why they got the carvings in the first place.

Carved horns are usually made to be more striking than your average horn. Some even go so far as to paint these carvings in vibrant colors to further accent what it represents. Carvings are often done to mark someone as a person who has accomplished a great feat in their life. What this feat could be is just about any kind of positive event, either for the one being carved or for those they may have helped.

Any species can come to have carved horns, and the reasons for why one would have their horns carved is as varied as there is stars in the sky. It can sometimes be a reward for an act of good in the eyes of others, or the mark of a true hero that stands out from the rest, or simply something of great personal significance that they would want to remember.

Carvings are important because they will last on ones horns long after death as permanent marks of the good things that person did. Thus, their story lives on.

Draw or write about an event of importance from your character's life.

Did your character ever save someone? Perhaps they are a local hero to whatever town they call home. They could have heroically defeated a monster terrorizing a city, or they could have befriended a great beast. Maybe they won some kind of contest or championship, like a gladiator battle or magical duel, or even something like a food eating competition.

Or it could be that, at some point in their life, they accomplished something of personal significance. They could have overcome a great struggle despite all odds stacked against them. Maybe their most impactful moment was an act of love, the time when they confessed or proposed to someone they cared about.

A serious event, a funny circumstance, or just another day in the life! Think of what sort of experience best suits your character!

✦Your entry can be written or visual art
✦ Entry submitted must be by you
✦ The Celestial Seas character used as the focus in your submission must belong to you.
✦ You can include additional characters you own, or characters owned by other users. Make sure you have permission to use a character in your entry. You can gift characters open to gift art here.
✦ Items obtained from the quest are not bound to you and do not have to be used on the character you completed the quest with.
✦ All stargold bonuses can apply! You can find all stargold bonuses here.

✦ For visual art submissions:
Must be full color
Must show at least 75% of the focus character
Must have at least minimal background details to indicate surroundings
Must clearly follow the prompt given

✦ Can only be completed once per character.
Completion will be added to the character's profile description.

✦ Cannot be completed as gift art.

✦ You can use a max of 1 companion, 1 trinket, and 1 clothing item TOTAL on your entry. Multiples of the same type are not allowed.

✦ Please do not include unofficial characters in your prompt.

✦ Please do not trace, heavily reference, or plagerize another person's work.

Be sure to use the "add rewards" and "add characters" to account for all stargold bonuses you earn and all your characters and companions.
You do NOT have to include the base amount (5✨) ! It is automatically included.