Spark in the Abyss

After the investigation of the various shanty buildings concludes, everyone sets their sights on a house at the very back of the village.  Something about it gives off a sinister aura causing many to back away, showing concern for the potential dangers that could lie ahead. Angea takes the lead, walking right up to the front door, which has been left ajar, and peeking inside. She quickly realizes that not everyone will fit inside and turns back towards the group of adventurers that have come this far. She rubs her chin in thought for a moment while scanning the small crowd before her when her eyes come to focus on you. She points in your direction.

Once you give confirmation, Angea heads inside and you follow behind at your own pace. Pushing open the door into the dark interior, the first thing you notice is the thick stench of mold that fills the building. The small gust of air from the door opening stirs the layer of dust on the floor, drawing a sneeze or two out of both you and Angea. She reaches, pulling up her scarf over her nose as she pokes around further. It’s clear that it’s been months since someone has been in here, considering you leave clear footprints in the dust.

Furniture is sparsely placed around the home, seeming just as abandoned as the town outside. The corners of the house have worn and rotted away with time and lack of maintenance. A soft dripping sound can be heard from somewhere in the room, indicating the place must have a leak hidden away somewhere. It's extremely dark with only the hint of light from outside creeping in, along with the lone candle lit in the doorway. Angea can be seen poking around for some kind of light with little success. To be expected, any lanterns or light switches are completely unresponsive.

Suddenly, something brushes past your leg. Thankfully it's no monster, it's Cteno! They were so quiet it would've been easy to forget that they followed along as well. The kitbull hurries after Angea with a visibly stressed expression as they try to convince Angea to leave. They're awfully worked up about this, and while Angea gives what seems like an understanding nod, it seems like Cteno was not able to convince her to turn back.

The search continues until you stumble upon something.

There’s a place on one of the dressers where it is clear the dust had been disturbed ever so slightly. Faint streaks in the dust that look like cloth had brushed against it. Angea is quick to perk up at the potential sign of activity.

Scrounging through drawers, it appears that most are empty aside from dead bugs and old scraps of cloth and paper that have faded away with time or been chewed apart by resident critters. The top drawer holds more promise, with several old bundles of paper and a few coins scattered amongst lonesome trinkets but nothing appears to hold much value. You both continue your close inspection, and find that one of the trinkets - an old candle holder - appears to have a string of runes carved into it. Despite being long abandoned, a wax candle still is placed in the holder.

Light it with a fire spell.

With the flick of your fingers the candle wick sparks to life. The flames quickly shift from the usual color of your magic into a particularly ghostly, cold blue. The light from it doesn’t carry very far and it hardly illuminates the room. Angea offers her thanks in response.

She pauses, as if waiting for anything to happen, but the room remains silent.

Shrug. You don't have anything to light it with.

After a moment of rummaging, she pulls forth a set of matches and a deep orange gemstone. She scrapes the match along the gemstone several times, a smile spreading on her face as the match finally sparks and lights.

She lights the candle and puts out the match with a flick of her wrist, waiting eagerly to see if anything happens afterwards. The flame changes from a warm red into a ghostly dim blue.

A soft click is heard somewhere in the room, quiet enough that if one were not focusing it would be easily missed. Following it is a brief clatter as something nearby moves, causing the three of you to turn your heads towards the sound. A passage has opened where the floor meets the wall on one side of the room, revealing a dark, steep stairwell that leads into the unknown. Hardly deterred by this new development, Angea starts forward with plenty of pep in her step. Cteno once again tries to advise her otherwise, but she is much too intrigued by the potential secrets to be uncovered to be stopped now. It’s clear that she assumes you both will follow, and after a moment of coaxing Cteno the two of you make your way behind the daring adventurer. The path leads down into a cramped stone hallway with a small room at the end.

As you all enter the room, candles lining the walls suddenly light themselves. Strangely there are also various lights strung around the room as well that begin to glow as if electrical power has returned to this place. Something shiny catches your eye at the back of the room, but there's loads of other things in here to investigate.

Check out the room first.

The room is just about as run down as the rest of the building. Debris and tattered cloth are strewn around in disarray, and various marks seem to line the walls. One in particular catches your eye, which seems to be drawn in the shape of a door. You push on the boards but find that they do not budge. Upon closer inspection, runes seem to line the drawing outline - a magical gateway, perhaps?

Moving on you decide to check out the large well-worn map hun on the wall. It depicts specific regions across the Celestial Seas, mostly of known areas. Aldebast, the magical college, is marked with a star, along with Harara. Unlike the college, however, the sun kingdom’s star has an x struck through it, almost as if marking it off. Several other locations are scattered around with stars, some with x’s, some with nothing. There is one particularly large circle with an arrow pointing to it accompanied by an odd symbol, and you quickly realize the location in question is Centuary.

Surrounding the map there are a variety of photographs pinned to the wall. The pictures show various people together, usually posing with some kind of treasure they’ve scored or simply enjoying themselves in each others company. The pictures give off the opposite energy from the rest of this place.

One in particular is signed. 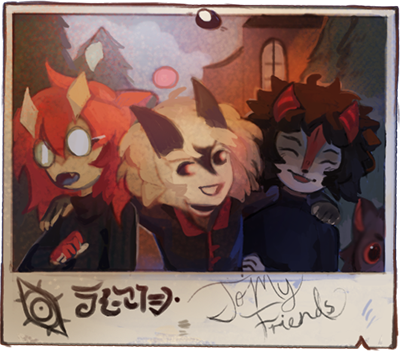 There doesn't seem to be anything else of note in here aside from whatever caught your eye at the back of the room.

The glint was from a single stray stargold catching the light.

It must have caught Angea's eye too, as she is now snooping around that area. She feels along the wall until her hand catches something and with some effort she begins to move a large wooden board that was concealing a hole in the wall revealing something bright that reflects the light from the bulbs strung above and the various dim fires around the room.

Within a carved out area sits a massive pile of treasure - stargold, coins, jewelry, gemstones, various weapons, armor, crowns, and more. All simply sitting there, untouched for who knows how long! Atop the pile of gold you notice a trophy that almost gives off an aura of importance in comparison to all the other sparkling treasure around it.

Oddly enough, all of the larger objects appear to be missing something, as though someone pried a valuable gemstone out that once adorned them. Angea carefully picks up the trophy thinking it to be of some importance. Carefully she turns it over in her hand to carefully inspect the item and the small details carved into it. Her brows furrow, almost as if struck by a sudden realization brought on by familiarity. 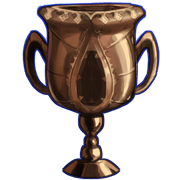 Cteno, who was hanging behind to observe, finally approaches Angea and tugs on her tail. They start to speak and Angea instinctually translates.

But I wanted some treasure... 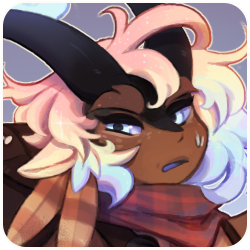 Angea shoots you a look, the kind of look that says it’s really not up for debate. She’s not going to let you have any of that treasure, at least not while she’s around. Real adventurers don't steal after all. Though maybe no one will notice if you sneak off with a couple pieces of stargold... But unfortunately there never seems to be a good opening to attempt it. 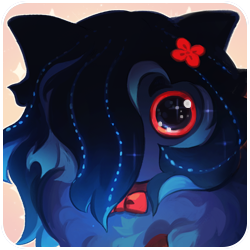 Cteno in particular recognizes your gaze and the two of you exchange glances and perhaps even a knowing nod. Cteno and you share a deep understanding as they look back upon the hoard of treasure. For a moment, perhaps, they had the same thought as you. A deep longing for the sparkling riches before you both... But alas it was not meant to be.

You give a small nod in agreement. Cteno looks the two of you over, and to both your and Angea's surprise they do not take long to oblige.

Their expression becomes the all too familiar look of exasperation.

With Cteno’s approval and hushed agreement you and Angea leave the building, trophy in tow and make sure to close off the secret passage again and turn over the marked candle to Cteno to prevent any other explorers from stumbling upon the secret stash by mistake.

Having returned to the finishing celebrations, visitors have congregated again at the platform near the entrance to the city. Many are bidding farewell to the residents and finishing up their last few purchases, spirits high from the festivities even amidst unexpected events. Some exchange contact with new friends they met in the city, and many leave with all sorts of new treasures and trinkets in tow.

On your walk back from the Undertown, Angea extends the offer for you to accompany her back to Aldebast to return the stolen trophy. You oblige, setting your course for Aldebast with the company of several other adventurers who have agreed to come as well. It's time to set sail again!

The end!
For now.

AAAAAAAAA THERES SO MUCH TO UNPACK